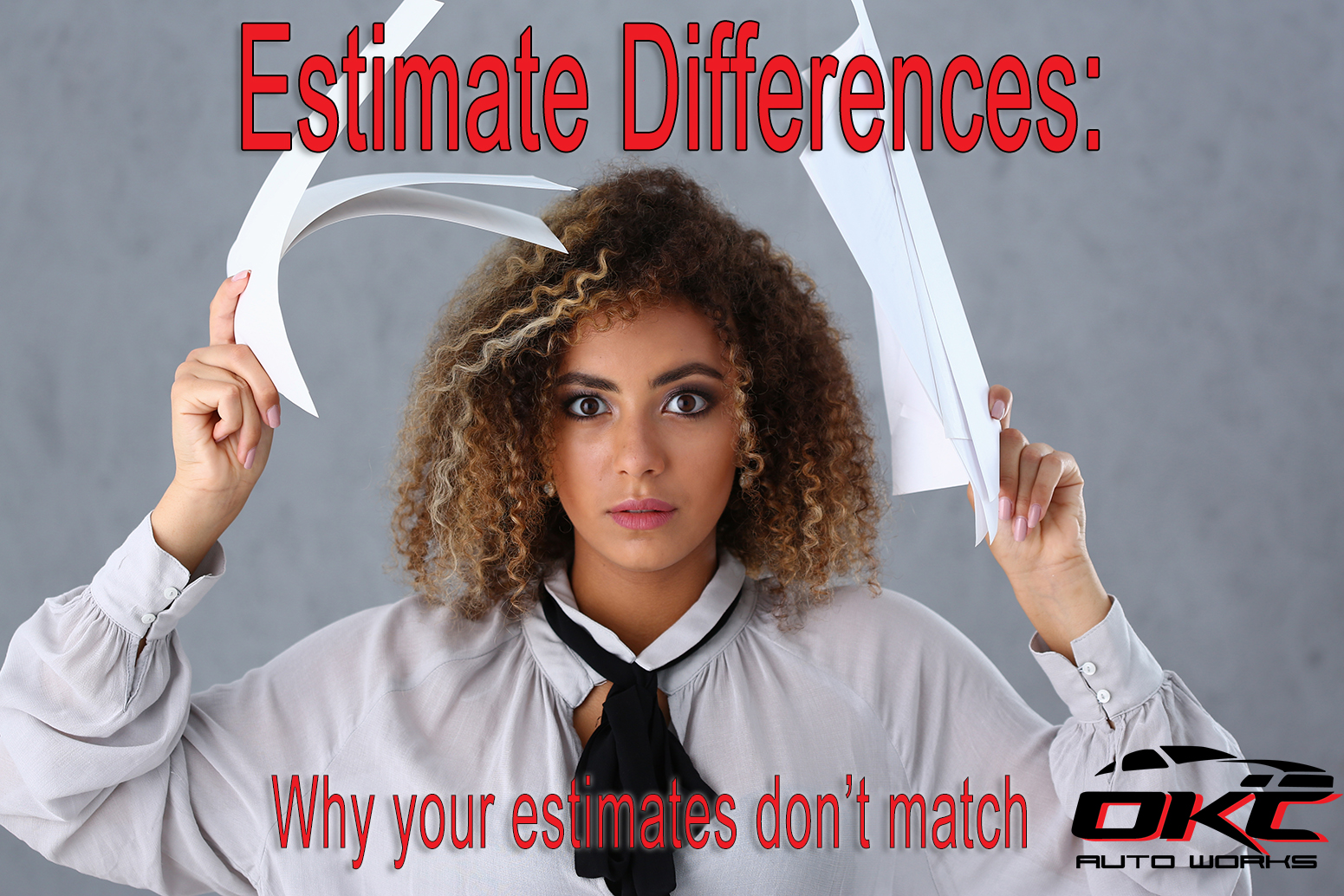 Statistically speaking, the average driver will be in an auto accident approximately every 18 years (Forbes). If you have not yet had an accident, count yourself among the lucky. It is estimated that 6 million auto accidents happen daily in the United States (DriverKnowledge) and for those unlucky folks who find themselves dealing with an auto accident, it can be inconvenient and even confusing. While your insurance agent or claims department can direct you in how to file a claim and some things to consider when looking into a repair, there are some common estimate questions that your insurance representative may not know how to respond to, especially when it comes to estimating differences.

There are four areas where one may commonly see estimatic differences. They are:

An important thing to remember with an insurance adjuster is that they are a representative for the insurance company. They are tasked with giving a fair assessment of the damage, but also in a position to do what is in the best interest of their company. Keep in mind too that many adjusters have no prior auto body or mechanical experience of any kind. So while they may recognize that a part is damaged, they may not have the experience necessary to know the number of hours the repair would take the average technician to complete. Insurance companies are aware of this as well, which is why they have a supplement process in place. Once you take your vehicle to a quality repair facility, they know what to do in order to ensure the necessary repairs are made on your vehicle.

Estimate Differences: This Shop vs That Shop

It is not abnormal for one shop’s estimate to differ from another shop’s. There are two factors often involved in such differences: experience and time. A more seasoned estimator will typically write a more thorough repair assessment than a less experienced estimator. Additionally, an estimator who is in a hurry or short on time may also not write as complete of an estimate. Many times, the difference in estimates comes down to one estimate having the items listed that need to be removed to access the damaged area for a repair. These items are then reinstalled after the repair is made. Such items as that will show up on your estimate as R&I.

Note that even when something is left off of an estimate such as an R&I item, it will most likely get added to the final ticket during the repair process. It is, for this reason, your deciding factor should not come down to the lowest estimated cost. Before you choose a shop, you should understand the reason for the estimated differences. OKC Auto Works can do an “apples to apples” comparison to help you understand estimate differences. Do not hesitate to stop by OKC Auto Works. One of our experienced estimators goes through both estimates with you to give you a line-by-line breakdown.

There are really two reasons why a cash pay estimate can differ from an insurance claim estimate. Some shops charge more (or less) per hour for labor costs with a cash pay job. So the first item you would want to look at is the labor hour costs when comparing both estimates. If that is the same, the difference is in the actual repair. A seasoned estimator will do their best to ensure that all potential costs are on a cash pay estimate so that the customer is less likely to be hit with any surprises during the repair process.

On a cash pay estimate, an estimator may write for a repair or replacement on some items that are not visible without pulling off parts. Because of experience, the estimator knows there is a good possibility such repair would be necessary, so they go ahead and include it on the cash pay estimate. During the repair process, if an item is discovered to not be damaged it will simply be removed from the repair ticket. In these instances, it is possible to end up with a final bill less than the original estimate.

As we just mentioned, most insurance claim estimates will incur at least one supplemental estimate during the repair process. This can happen on cash jobs as well. The most usual culprit for this is hidden damages. For instance, while a bumper may look like it is one whole part on your vehicle it is actually several pieces, the 4 main components being the cover, absorber, reinforcement bar, and mounting system. Typically, in a fender bender, the outside bumper cover is visibly damaged, however; the other 3 main components are not typically visible to assess the damages until the cover is removed during the repair process. This is just one example of many that are discovered during the repair process and added to the final repair bill.

Supplemental damage is the most likely reason as to why an original estimate differs from a final repair bill, however; in a few cases betterment can be the culprit. A good example of betterment would be if you received a new tire on your vehicle during the repair that replaced an older tire that had little tread left on it. Since insurance is supposed to put your vehicle back to the state it was in prior to the car accident, not better than before the car accident, some insurance companies will insist on passing the “improvement” differences onto the consumer. Betterments do not happen very often, however; they do happen often enough that it deserved to be mentioned.

You need to feel comfortable with the place you choose to get your vehicle repaired. It is for this reason OKC Auto Works has an open-door policy. If you ever feel as though you do not understand your estimate or want an “apples to apples” estimate comparison, please do not hesitate to stop into our shop. We recommend making an appointment so that we can set aside time just for you, however; if you don’t mind potentially having to wait walk-in estimates are always welcome. 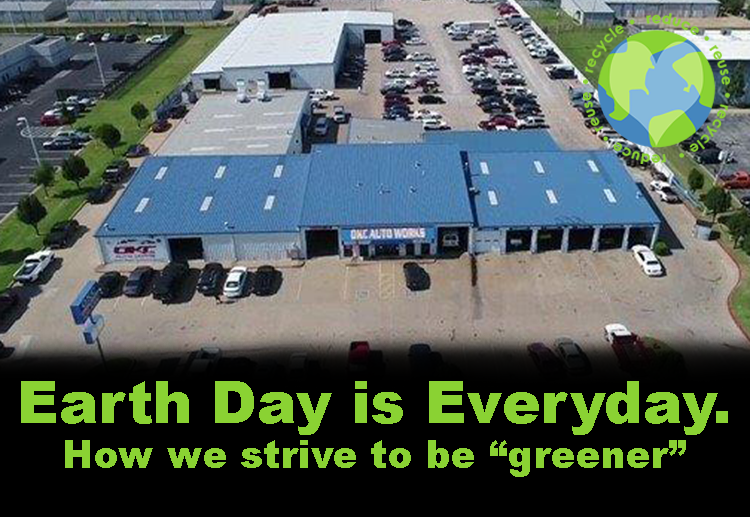 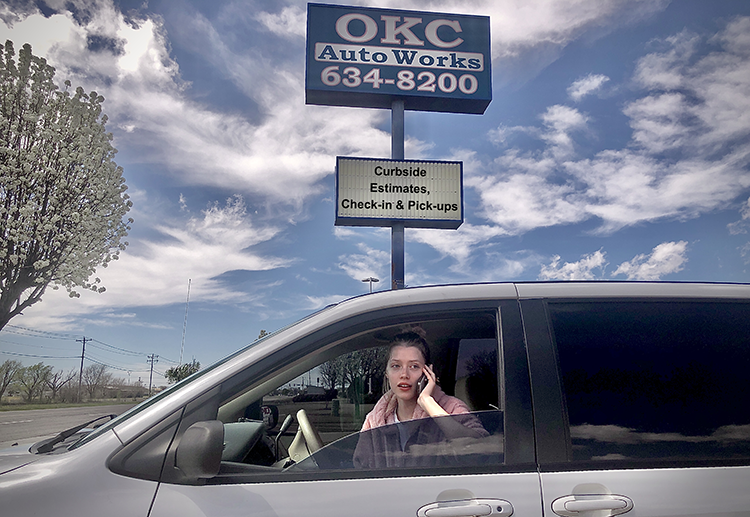 Will You Waive My Deductible?